It was billed as Donald Trump’s “Keep America Great” Rally Tuesday night in Wildwood, but the event seemed to be part rock concert, part anointment of Congressman Jeff Van Drew’s new status as a Republican, and mostly a lovefest for the 45th president of the United States.

Thousands waited in line for hours and some for days to have a coveted seat in the Wildwoods Convention Center or a standing room spot on the floor of the arena.

“How about the president of the United States being right here in South Jersey?” Van Drew bellowed after being introduced by Trump.

“The president asked how he could help me and I said, ‘Come to South Jersey,’” Van Drew told the crowd. “Without any hesitation, he said yes. And here he is. He kept his word and now the eyes of all the world are focused on South Jersey.”

After his November 2018 election as a Democrat, Van Drew had voted against the President’s impeachment, and then switched parties last month.

Trump returned the love for Van Drew, calling him “a very brave man” who had the courage “to stand up for his beliefs,” and who Trump said should be an example for other Dems “to join the movement.”

Although no official crowd estimates were available as of Tuesday night, NBC10/Telemundo reported 12,000 had been admitted into the building.

Thousands more left Wildwood disappointed when admissions were finally cut off, and many waited in the parking lot to watch on big screen video boards. People began arriving and lining up on Sunday, and in large numbers on Monday.

Local talk radio host Harry Hurley posted on social media around mid-morning that 10,000 people were already in line as traffic continued to pour into the resort town, normally deserted this time of year.

Chris Harris, of Greensboro, North Carolina, had a small table set up across the street from the event, where he hawked Trump merchandise. He was there not to make money, he said, but mainly to support his son, also named Chris, currently serving in the Army.

Sonny Furman looked over Harris’ wares and thanked Chris for his son’s service. A summer resident of Wildwood for 20 years on nearby Baker Avenue, Furman said he drove to Wildwood earlier in the week from his full-time home in suburban Philadelphia to keep an eye on his property.

“It looks like a nice, well-behaved group,” he said.

The line of people waiting to get in originated a few steps away from the main entrance to the building and snaked around streets in the area, largely closed off to all traffic around noon, seven hours before the rally’s announced starting time of 7 p.m.

Paul Miller of Elkton, Maryland, said he had spent more than a day and a half driving to the event and waiting for it to start. The retired carpenter, wearing a gag Trump visor topped off with fake orange hair, said he was a “registered independent” who had voted Democrat his whole life until he was the victim of a physical assault. Since then he has been an avid Trump supporter because of the president’s position on the right to bear arms.

“I think there would be a whole lot less crime if more good guys had guns, instead of mostly bad guys having them,” Miller said.

During the rally, Trump touched on Second Amendment rights, drawing loud cheers, along with many of the other themes of previous rallies: opposition to late term abortions, tougher immigration rules, construction of a border wall and easing of environmental restrictions, among them.

The president also praised many of his own initiatives, saying “sometimes you have to thank yourself, when nobody else will do it,” he said, citing the appointment of “191 federal judges and two new Supreme Court appointments who share our conservative values,” as well as record gains in the stock market, “some of the lowest unemployment rates ever and $160 million to upgrade facilities and equipment at South Jersey’s McGuire Air Force Base and Fort Dix.”

The latter reference to the local military bases drew loud cheers, as did Trump’s praise for the air strike he ordered in Iran that killed Iranian General Qasem Soleimani.

As with previous Trump rallies there were the chants that broke out on cue. “USA! USA!” was heard a half dozen times in reference to foreign affairs, a new trade deal with China and positive strides in the economy. “Drain the Swamp!” was chanted when the president spoke of rooting out corruption at home and in looking ahead at upcoming elections.

Media members were pointed out several times by Trump, who used his “fake news” designation for the press, causing jeers and catcalls to be directed at the several hundred media representatives covering the rally.

Many local restaurants extended their hours to profit from the crowds. One of them, about two blocks from the Convention Center, sold $20 bag lunches to hungry Trump fans. Hotels close to the arena sold out within 24 hours of the announcement of the rally.

A few hundred protesters held their own rally in a designated spot several blocks away. Additional protesters found their way into the Convention Center parking lot, where they exchanged verbal barbs with the Trump supporters.

Inside, a group of people elected not to stand for the National Anthem and were jeered. There were no reports of physical confrontations or violence on the part of the protesters, or the Trump supporters.

“This is just a great thing. A happy, fun event,” said Hurley’s twin brother, Don, an event volunteer who was directing media members toward their entrance and security checkpoints.

“People from all walks of life are here, brought together to see the president of the United States,” Don Hurley added. “This is a great thing no matter (what political affiliation) you happen to be.”

That said, state and South Jersey Republican politicians happily rode the president’s coattails at the event, either taking to the podium, like freshman state Sen. Mike Testa and State GOP Chair Doug Steinhard, or taking a bow when mentioned by Trump, such as former Gov. Chris Christie.

Cape May County GOP Vice Chair Susan Adelizzi-Schmidt summed up the evening from a local Republican point of view.

“It’s a fantastic thing (for the region),” she said. “The thing I keep coming back to is all the excitement and all the energy in this arena,” she said. 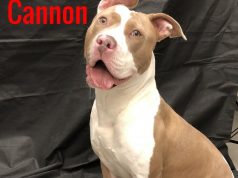