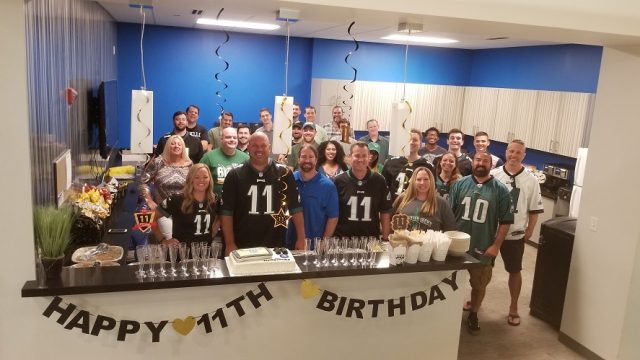 CAMDEN – Global digital marketing agency WebiMax, the parent company of Mediawize, LLC and its online news sources, Downbeach.com, OCNJDaily.com, SomersPoint.com and SeaIsleNews.com, ushered in its 11th anniversary in style Wednesday by celebrating its favorite #11, the Philadelphia Eagles’ own Carson Wentz.

“The first thing that comes to mind when I think of 11 is Carson Wentz,” WebiMax CEO Ken Wisnefski said. “We are at the start of another Super Bowl season for the Eagles, so the timing was perfect.”

WebiMax takes great pride in being an integral part of the local community and admires its favorite quarterback’s commitment to giving back. That is why the company will be honoring its 11th anniversary by donating $1,100 to Wentz’s “Audience of One Foundation.”

WebiMax has had quite a bit to celebrate over its 11 years in business, including being named to the Inc. 500 Fastest-Growing Companies on three occasions and  one of Forbes’ Most Promising companies.

Wisnefski credits the company’s success on its ability to evolve with the changing times in the digital landscape.

“Eleven years ago, Facebook was just really coming to prominence, the term ‘social media’ was entirely new, and the iPhone had just been introduced,” Wisnefski said. “Now Facebook, social media and smartphones are some of the most vital aspects in effective marketing, so while other companies in our space failed to evolve, our ability to continue to stay ahead of the curve has really proven to be imperative not only to our success, but to our survival.”

When it comes to the future and what the next 11 years hold for WebiMax, Wisnefski had some very poignant thoughts.

“We live in a mobile world and effective marketing is going to be focused through apps, smartphones and smaller, more concise content. People want things fast and marketers need to adapt to those changes. Our biggest asset has always been the high-quality people who work at WebiMax and their ability to be forward thinking guiding our clients to success.”

Being an optimistic visionary, good things are in store for the Eagles, too, Wisnefski said.

“The next 11 years should also bring the Eagles five or more Super Bowl victories….the Tom Brady dynasty is as dead as traditional marketing.”

Driven for success, WebiMax helps its clients achieve tremendous returns through its online marketing efforts. Led by serial web entrepreneur and digital marketing expert Ken Wisnefski, WebiMax has established itself as one of the most respected digital marketing firms worldwide. WebiMax is proud to provide solutions that positively impact clients ranging from early-phase start-ups to Fortune 100 companies.

No Curbside Service at County Libraries

No Curbside Service at County Libraries