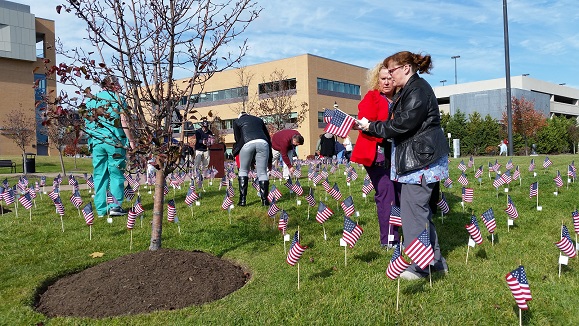 About 1,200 miniature American flags blanketed the lawn Friday at Shore Medical Center in a profusion of red, white and blue patriotism.

Although tiny in size, what they symbolized was enormous.

In a Veterans Day tribute, employees at the Somers Point hospital planted the flags in honor of family members who have served in the military.

As word of the flag-planting spread through the community, Shore was asked to open it up to the public. So it did, allowing the flags to serve as a colorful focal point of the medical center’s first-ever public Veterans Day ceremony Friday.

Fred Banner, an Air Force veteran and Shore’s vice president of information and technology, said the flags were a powerful reminder of the sacrifices made by the men and women of the military.

“Let us never forget the cost of freedom,” Banner said.

Richard Pittman, an Army veteran and former chief executive officer at Shore, said members of the military represent only about 1 percent of the U S. population, meaning they are responsible for protecting the remaining 99 percent.

He urged the crowd to extend a simple gesture of thanks to a family member serving in the military, perhaps a handshake, a hug or treating them to dinner.

Pittman also took special note of the flags dotting the hospital lawn and what they represented.

“Look at these flags. We could have more,” he said.

The burst of patriotism by Shore’s employees wasn’t limited to the flag-planting.

Theresa Carr, a registration clerk in the emergency room, organized the collection of “care packages” for American troops stationed overseas.

Carr and her co-workers filled nine large boxes with food, books and health and beauty supplies, sending them to members of the 514 Aeromedical Staging Squadron of McGuire Air Force Base while they were in Afghanistan.

“It’s always important to support the troops,” Carr said, noting she has a nephew who served in Afghanistan.

Carr, of Middle Township, also got her 7-year-old daughter, Lillian, involved in a school project to help her learn about the importance of the military.

Lillian and her second-grade classmates in Middle Township hand-colored a batch of “thank you” pictures and gave them to veterans to honor their service, Carr said.

Dalkirmaz, who is a nurse with the 514, is also a nurse at Shore. She said she was touched by the support her co-workers had shown for her squadron.

“I was so proud of the place where I work and the people I work with,” said Dalkirmaz, who lives in Somers Point. “They are so caring toward the people who serve in harm’s way.”

The outdoor ceremony also included a procession of motorcycles ridden by members of American Legion Post 352 in Somers Point.

Singing the national anthem was Marianne Baumbach, a retired K-9 officer with the Port Authority of New York and New Jersey who helped with the search and rescue efforts in New York City after the Sept. 11, 2001, terrorist attacks.