Summer officially ended at 10:21am on Thursday but for those longing for autumn blasts of chilly air will have to wait a while. Temperatures will approach 80 as we finish out the week but as we head into the 2nd half of the weekend, a backdoor cool front will move through our area. Temperatures by Sunday and Monday will struggle to reach 70 with morning low temperatures in the 50s. As we finish out September and move in to October, long range forecasts continue to show near seasonable to above normal temperatures and below normal precipitation. 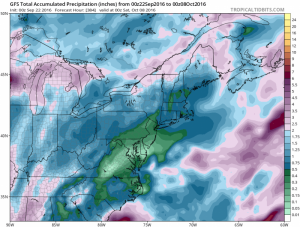 Forecast Rainfall amounts show less than .50” of rain over the next 2 weeks.

If you look forward to traveling north to view this season’s fall foliage, you could be disappointed. The prolonged warm temperatures and drier conditions will cause leaf colors to be less vibrant.

Remember we are still well into Hurricane Season. Even though we have left the peak of the season. October could still provide some activity in the tropics. Luckily, conditions have not been favorable for tropical systems to intensify due to the high wind shear and dry air stifling the storms.

After a close call with Hermine Labor Day Weekend, 4 more named storms occurred with 3 of them remained out in the Atlantic with no threat to land. Only exception was Tropical Storm Julia, which its remnants dropped over a foot of rain along coastal Virginia and 2″-4″ along the New Jersey coast on Monday. 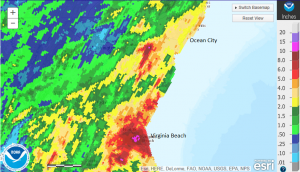 One forecast that changed was the emergence of La Nina that was expected to arrive this Fall. La Nina is a result of cooler than normal temperatures along the Pacific equator which can affect the weather on a Global scale. While the Pacific Ocean cooled rapidly earlier this year after a record breaking El Nino last year, the rate of cooling has slowed. As a result, the La Nina watch has been dropped and neutral conditions are expected to persist through at least Fall.

It is still too early to determine how this will affect our upcoming winter but early indications suggest that we could start out with a “mild” December with a colder and more active January and February.