Save Our Shoreline — Stop the Wind Farms Off the Coast of NJ is proud to announce that best-selling author Michael Shellenberger is coming to Ocean City on Thursday, July 15, at 7 p.m. to present his respected views of so-called “green energy.”

“Shellenberger will help educate the citizens of Ocean City and New Jersey about the risky, unreliable and ill-advised proposal to build industrial wind farms off the New Jersey coast,” said Trica Conte, Founder of the Facebook Group Save Our Shoreline — Stop the Wind Farms Off the Coast of NJ.

“On behalf of the 4,200-plus followers of Save Our Shoreline NJ Facebook page, and the 10,500-plus signers of our Change.org petition, I am pleased to organize this special event and look forward to a crowd at the Ocean City Music Pier on Thursday, July 15th, 2021 at 7 p.m.,” Conte said.

Shellenberger is author of the best-selling new book, Apocalypse Never (Harper Collins June 30, 2020), which has received strong praise from scientists and scholars, including Harvard’s Steven Pinker, MIT climate scientist Kerry Emanuel, and the former CEO and Chief Scientist of The Nature Conservancy.

“This may be the most important book on the environment ever written,” writes leading climate scientist Tom Wigley.

Shellenberger advises policymakers around the world, including in the U.S., Japan, Taiwan, South Korea, the Philippines, Australia, United Kingdom, the Netherlands, and Belgium. In January 2020, Shellenberger testified before the Committee on Science, Space, and Technology of the U.S. House of Representatives. The Intergovernmental Panel on Climate Change invited him in 2019 to serve as an independent Expert Reviewer of its next Assessment Report. 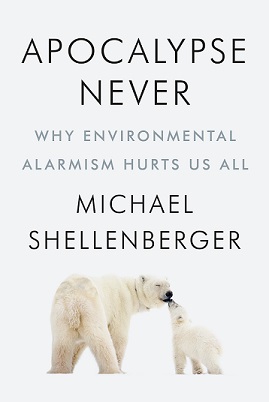 “The underlying problem with solar and wind is that they are too unreliable and energy-dilute. “The reason renewables can’t power modern civilization is because they were never meant to. One interesting question is why anybody ever thought they could.” — Michael Shellenberger

Conte said, “As you know, for more than two years the Danish company Orsted has invaded New Jersey spending millions of dollars pushing corporate propaganda for their unprecedented, ill-advised industrial wind farm, while simultaneously unleashing their foreign agents to lobby and mislead elected and appointed officials in Ocean City and across New Jersey. Orsted has also forced their corporate propaganda into our public schools, which is unacceptable.”

“It is in the best interest of all citizens of Ocean City and New Jersey to have a full, open and honest debate, encouraging alternative views and a range of information, to help citizens determine whether to support or oppose President Biden’s and Governor Murphy’s radical and unprecedented proposal to irrevocably and negatively alter the environment, the economy and the future of the Jersey Shore and the Atlantic Coast,” Conte said.

“Our proposal to invite journalist and author Michael Shellenberger — “North America’s leading public intellectual on clean energy,”– to come to Ocean City is made in the spirit and with the intent of adding important and relevant information and opinions to the public debate. If industrial wind farms were so great and were going to save you money, Governor Murphy, Senate President Sweeney and Assembly Speaker Coughlin, and Orsted would not have to use blunt force to implement or hide the real costs of their Energy Master Plan (EMP),” Conte stated.