When Hurricane Sandy pummeled the New Jersey coast in 2012, some areas were devastated, while others were relatively unscathed or even untouched.

Parts of the shore that fared the best often were those protected by the older, more robust sand dunes fortified by grass or other vegetation.

The Pinelands Preservation Alliance and Raritan Valley Community College have teamed up for a program, now in its fifth year, to help shore towns protect and nurture their dunes along the 127-mile-long New Jersey coast stretching from Monmouth County to Cape May County.

The dune management program is funded by the National Fish and Wildlife Foundation and is free to the towns that participate. Towns or privately owned beaches in Cape May, Atlantic, Ocean and Monmouth counties are eligible.

In simple terms, Rebozo said the management program underscores the relationship between the beach and the dunes and how crucial each one is to the other.

“The big thing is linking the beach and the dunes,” he noted. 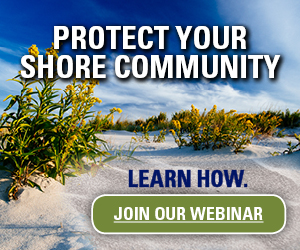 More than 70 percent of the coastline is disturbed by beach raking and other practices that prevent dune development, according to the Pinelands Preservation Alliance. Towns use sifting or raking machinery to remove seashells, trash and other debris from the sand, giving the beaches a pristine appearance for the summer tourists.

The dune management program establishes an area at the foot of the dunes, called “plant protection zones,” where no beach raking is allowed. Vehicles are also prohibited from driving in the same area. A strip of plants is created to help the dunes build up through their natural cycle.

“This allows for the natural development of dunes and the enhancement of habitat for several threatened and endangered plants and animals that depend upon these areas for survival while not having a measurable impact to recreational uses of the beach,” the Pinelands Preservation Alliance says about the management program.

As part of the program, the Pinelands Preservation Alliance and Raritan Valley Community College will:

Rebozo said a number of communities and state parks are already participating in the dune management program, including Corson’s Inlet State Park between Ocean City and Strathmere, the city of Ventnor, Cape May Point and Island Beach State Park in Ocean County. Several towns in Ocean and Monmouth counties have also signed up.

Altogether, the Pinelands Preservation Alliance and Raritan Valley Community College have managed the dunes in this way along 22 miles of the New Jersey coast, representing 17 percent of the state shoreline.

Rebozo is hoping the program expands, but stressed that shore towns should sign up as soon as possible because the funding is scheduled to run out in June, although the alliance is hopeful of getting more money next year.