Driving over the Route 52 Causeway, motorists may notice something gleaming in the distance. The Somers Mansion, the oldest existing home in Atlantic County, has a splash of fresh cream-colored paint, compliments of the volunteers from The Patriots for the Somers Mansion.

On Saturday, about 12 members of the nonprofit 501c3 organization, which was formed in 2018 to beautify the state-owned mansion, painted and cleaned the exterior.

They began at 7:30 a.m. and by noon there were just finishing touches to be done to close out the day.

Greg Sykora, who is chairman of the Somers Point Economic Development Commission, started the organization and hosts fundraisers to help maintain the mansion. He and the other volunteers are in contact with the state for approvals on all of the cleanups, paint colors and other work.

Sykora explained that the goal of The Patriots of The Somers Mansion is to ensure the gem of Somers Point, built in 1725 by Richard Somers, is well cared for.

He said the next beautification day at the mansion is scheduled for June 8. The tentative plan is to have the Saturday cleanups through September.

On Saturday, Sykora came down from a bucket truck, donated by Tim Lenzsch, owner of The Tree Man, after hours of painting.

When he completed the second coat of paint to an exterior wall, he said, “We can’t believe it got done so fast.”

He noted that motorists will now have a beautiful vista rather than the gray, dirty exterior that made the historic site a bit of an eyesore.

Sykora, of Somers Point, said the cost for the project was under $1,000 largely because of business owners who provided the products at no or little cost. Money from fundraising efforts throughout the year helped pay for the work.

He said the project would not be possible without all of the help from the community, the businesses and residents. Walt Gregory, of Gregory’s Restaurant in Somers Point, also pitched in to help the group.

“It is fantastic to see,” Monroe said. “I can’t believe we got it all done in one day.”

The building as placed on the National Register of Historic Places in 1970, according to Wikipedia.

However, Sykora noted that the state does not have a lot of funding for the mansion, so the volunteers want to do their part to ensure the site remains a place that the community can feel proud of.

For more information visit www.somersmansionpatriots.org or visit them on Facebook. 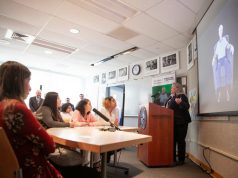